Steve Jobs unveiled the first-generation Apple iPad on January 27, 2010 and it was ahead of its time. At 0.5-inches thick, it weighed in at 1.5-pounds, which was thinner than any laptop or netbook over a decade ago, and had 12 exclusive apps designed just for the device. What set the iPad apart from its competitors was the library of over 140,000 apps, and next-generation multi-touch functionality.

It worked in both portrait and landscape, automatically switching between views as the user rotated the device. The iPad was only offered with a 9.7-inch LED-backlit display with iPS technology, an A4 system-on-a-chip, and Wi-Fi or 3G connectivity. Charging was completed with a Apple 30-pin to USB cable through iTunes and a full charge was good for up to 10-hours of continuous use. 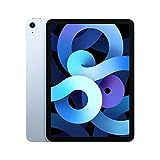 iPad is our most advanced technology in a magical and revolutionary device at an unbelievable price. iPad creates and defines an entirely new category of devices that will connect users with their apps and content in a much more intimate, intuitive and fun way than ever before,” said Steve Jobs, former Apple CEO.