Inventor Shane Wighton likes to think outside the box, whether if he’s playing basketball, or just some pool. Since he’s not a professional at either, robotic intervention is required to master some things. His latest project involved building a robotic pool cue that can easily sink trick shots. In a typical game, the eight-ball can not be sunk until all the other ones are in the pockets. This ingenious robotic pool utilizes a projection system and algorithms to precisely direct his shots.

The algorithms then determine what shot should be taken based on various factors, including the distance and where the cue ball will land for the next shot. A projector then projects lines onto the table to show where it should be placed, and the pool cue takes care of the rest. The coolest part is the Arduino Uno computer the cue uses to control air pressure and determine the power of the shot, while a camera mounted over the table detects the positions of all of the balls. 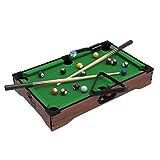