Ever wonder what ‘The Simpsons’ house would look like in 8 different British home styles? If so, you’re in luck, as Household Quotes has reimagined the famous TV home in Tudor, Georgian, Edwardian, Semi-Detached, Art Deco, New Builds and Modern Minimalist styles for your viewing enjoyment.

All of these styles come with their own period-appropriate vehicles and foliage. Speaking of ‘The Simpsons’, did you know they actually built a real house modeled after the one featured in the TV show? That’s right, it was built in 1997 for a contest known as ‘The Simpsons House Give Away’ in Henderson, Nevada. The grand prize winner could either accept the house or take a $75,000 cash payment instead. Barbara Howard from Richmond, Kentucky won the house and chose the cash payment, which meant the home builder had to remove most of the details related to the TV show before selling it in 2001. 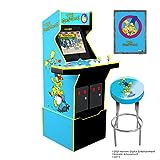