Tim Lorentz may not be a familiar name, but in Spokane, Washington, he’s known for LaBoata. This bizarre vehicle originally started out as a 1993 Chrysler LeBaron convertible, and soon after, a boat was acquired. These two were brought to Newtech Skills Center, where he teaches special education, and with no plan written down. However, that didn’t slow him down, as the entire conversion took only three days, with two of them slicing off the bottom of the boat.

Don’t let its look fool you, La Boata still retains most of the car’s functionality, including air conditioning, power windows and cruise control. Over the years, he’s upgraded the vehicle, using parts from a 1992 Chrysler LeBaron convertible. Now, it has a blue interior and a blue stripe on the side. 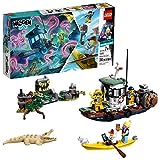 I had six kids and my wife didn’t want me to spend much money on my weird projects. I needed to find a cheap convertible. Chrysler LeBarons are not necessarily convertibles that people want. I had owned several Chrysler LeBarons, and they were fairly inexpensive and fairly reliable. I’m just an overgrown kid is what I am. It’s just totally fun is what it is,” said Lorentz.