Originally a subsidiary of the LEGO Technic series, Bionicle was basically a line of construction toys that eventually became one of the company’s best-selling properties. It became a successful franchise and helped saved the company from its financial crisis of the late 1990s. Fast forward to 2020, Bionicle: Quest for Mata Nui is a free open-world RPG set in the universe of LEGO Bionicle.

For the longest time, this game has been a one-man project done by me. However, in the more recent stages of development I’ve received some incredibly valuable help from key contributors, especially when it comes to the creation of 3D assets,” said Crainy. 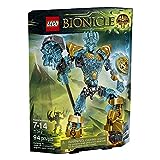