The fourth-generation (A80) Toyota Supra MK4 built upon its predecessors and wanted to classify itself as a high-performance car. It was offered with two engines: the 2JZ-GE producing 220 hp and 210 lb⋅ft of torque as well as a twin turbocharged 2JZ-GTE variant boasting 321 hp and 315 lb⋅ft of torque. One auto enthusiast from the Netherlands decided to take things to a whole new level.

The vehicle you see above is generating a staggering 1,239 hp and 826 lb-ft of torque, thanks to massive engine upgrades, which we assume includes larger turbochargers. For comparison, the factory twin-turbo model could hit 60mph in 4.6 seconds and cover the 1/4-mile in 13.1 seconds at 109 mph. If you’re wondering why this beautiful vehicle was discontinued, in the late 1990s, it’s because sales of all sport coupes were declining in North America. Plus, the Turbo was not available as a 1998 model year in California Air Resources Board (CARB) states due to emissions laws. However, production continued in Japan until August 2002. 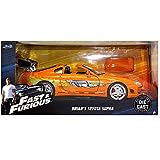