Fujifilm announced the X-T200, the latest addition to its X series of lightweight mirrorless digital cameras, and it’s definitely no slouch. Featuring a a 24.24MP APS-C sensor and a high-performance image processing engine that makes use of the unique color reproduction technology to recreate “memory colors” or colors as one remembers in one’s memory. It’s also the first Fujifilm camera to boast a Digital Gimbal Mode, which uses gyro sensors to accurately detect even the slightest of vibrations to control camera shakes during video recording.

Out back, there’s a large widescreen LCD monitor that provides intuitive touchscreen operations with a “vari-angle” structure that allows users to adjust the monitor to any angle. Plus, you’ll be able to record smooth 4K video at 30fps or HDR movie providing expanded tonal range even in situations with significant contrast in light levels. Available in silver, dark silver, or champagne colors, it’s set to go on sale in late February, priced at $699.95 for the body-only or $799.95 with a 15-45mm f/3.5-5.6 power zoom lens. 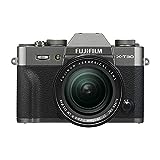 The X-T200 is a mirrorless digital camera capable of producing not only premium-quality photos but also full-fledged video, catering to the needs of photography enthusiasts and users who want to step up from smartphone cameras, trying to capture and record precious memories with ease and in high image quality,” said the company in a press release.