Photo credit: WAO RYU!ONLY in JAPAN
For those who grew up in the 1980s, video arcades were all the rage, or a place where people played arcade machines, pinball machines, electro-mechanical games, redemption games, coin-operated billiards or just air hockey. In some countries, like Japan, some of these arcades are legally permitted to have gambling machines such as slot machines or pachinko machines. If you weren’t around during that time, this video should provide a good look at how some of them ran.

Many are familiar with the standard wooden cabinets, but in Japan, these games were housed in smaller plastic ones that were designed to be played while sitting down. Parents were mainly concerned about their kids skipping school to frequent these establishments, and rightfully so. The momentum continued into the 1990s when the rise of the fighting game genre led to countless new locations opening in shopping malls around the world. 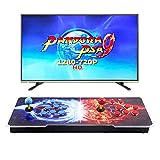