Photo credit: Mike Stallone
No, this isn’t a prank, but rather a real Guinness World Record for the greatest distance driven over water by a remote-controlled model car. To be more specific, Mike Stallone took a Traxxas Xmaxx RC car to a lake in Richfield Springs, New York, USA after spending weeks preparing it as well as studying footage. What happened next? As the title implies, a new world record.

Even though it took 6-hours to get to this location, the time spent was well worth the effort, as special paddle-like tires propelled this remote-controlled model car 0.95-miles on water. Best of all, the Traxxas Xmaxx was recovered unscathed after the record-setting run. On a related note, did you know that the first viable RC cars were manufactured by a British company in the mid-late 1960s? That’s right, these were either nitro- or gas-powered model cars. 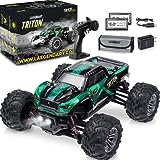