Casio Computer Co., Ltd. officially unveils the A100WEPC, a special edition watch that features none other than the iconic PAC-MAN, a classic game that is beloved around the world. The A100WEPC is based on the recent reissue of the F-100 digital watch that made its debut in 1978.

Casio’s A100, the reissue of the original F-100, brings back the classic design, including its unique four-button front layout. However, that is where the similarities end, as the styling is designed to evoke the fun, retro look of the PAC-MAN game, complete with colorful pixelated characters. In the center, you’ll find an ILLUMINATOR logo rendered using the PAC-MAN font. The face was designed to look like the actual PAC-MAN game screen, right down to the pink line, which marks the exit of the chamber from which the ghosts emerge. Available next month in Japan, priced at around $110 USD. 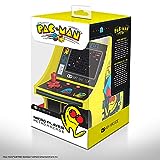 Released in 1980 by BANDAI NAMCO Entertainment Inc. (then Namco), PAC-MAN became popular for a concept anyone could grasp — eat! — a highly refined game system, colorful graphics, and bright, pop characters running through a maze. Now both the game and its characters have come to represent Japan and have thousands of fans around the world,” according to the press release.