Photo credit: ©Disney ©2019 Marvel
An animatronic Spider-Man is coming to Avengers Campus at Disney California Adventure park this summer. That’s right, you’ll see the Marvel superhero himself swinging above the rooftops. However, guests visiting the park prior to the opening of “World Engineering Brigade (WEB)” at Avengers Campus this summer can still encounter Spider-Man daily in Hollywood Land.

This animatronic robot of sorts comes equipped with articulating robotic joints and is attached to a bungie mechanism that launches him into the air. Once launched, you’ll see him perform flips and possibly even some web spinning action. After catching the show, head on over to the Pym Test Kitchen, which is an eatery where Technologies Researchers are using Ant-Man and the Wasp’s growing and shrinking technology to create super-sized and super small foods. 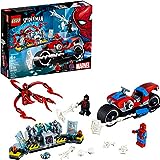 When Avengers Campus opens this summer, guests will be recruited to become the next generation of Super Heroes. The campus will be home to a variety of new experiences giving guests the chance to feel the power, adventure and exhilaration of teaming up with some of their favorite Super Heroes,” according to Disney.