Weighing 25-tons, the completed robot will boast 24° of freedom, enabling it to walk around the pier. Head of design Jun Narita said all the types of material and motors needed special considerations otherwise a single hand could have weighed in at a whopping 1,300 pounds. Unfortunately, the preview event that was scheduled to take place this month has been cancelled due to COVID-19. 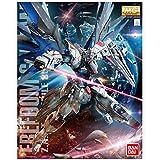