Gundam fans rejoice! Fans of the iconic anime series will be able to get an up-close look at the 59-foot-tall robot that weighs in at a hefty 25-tons at the Gundam Factory Yokohama, a 9,000 square-meter facility set to open at Yamashita Pier on October 1st. Unfortunately, it will only be on display for a year, but on the bright side, tickets go on sale in July.

You’ll have to wait until closer to the ticket release date to find out just how much it will cost, not including travel. We also don’t know what tricks this giant Gundam has in store for fans, other than it has 24 fully functional joints. In addition to this gigantic machine, Gundam Factory Yokohama is set to have two public areas: an 82-foot-tall Gundam-Dock that will serve as its maintenance site, and a two-story building with shops and event space. There is going to be soft-opening during July and August, but the Gundam robot itself won’t be revealed until October. 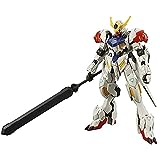