UpSwitch’s Orion Gaming Display transforms your Nintendo Switch in to a massive 11.6-inch portable game console. Don’t have your Nintendo Switch around? You can also connect a smartphone to this display and enjoy movies or games. A built-in kickstand means that you won’t have to prop it up on something for the best viewing angle(s).

If you do have a Nintendo Switch around, simply insert the Joy-Con controllers on either side, plug the console in via USB-C, and you’re ready to game. When at home, you can use its HDMI input to plug in a PlayStation 5, Xbox Series S | X, and even a laptop should you just want a secondary display for multitasking purposes. It’s available now, priced at $306 USD. 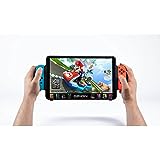 ORION doesn’t just make your Nintendo Switch®’s visual and audio experiences better, it also solves another long-standing complaint Switch® users have – battery life. ORION sports a 10,000 mAh capacity battery with a seemingly endless supply of power. By taking advantage of ORION’s battery and USB-C slot, you can actually charge your Switch® while you play so you never have to worry about running out of battery power while facing the final boss again,” said the company.