When you think of the Ferrari 308 Berlinetta, a Subaru BRZ typically doesn’t come to mind, but the Hoonigan crew pit them against each other in a bizarre drag race with surprising results. Why? The Subaru BRZ has been heavily modified, as in its 2.4L flat-four engine has been boosted to 228 hp, mated to a 6-speed manual transmission.

As for the Ferrari 308, it is powered by a 2.8L V8 engine making 237 hp and 192 lb-ft of torque, mated to a 6-speed manual transmission. Earlier models had bodywork made from glass-reinforced plastic (GRP), which enabled them to weigh in at just 1,050 kg (2,315 lb). This method was used until June 1977, when the 308 was switched to steel bodies, resulting in a 331-pound overall weight increase. They came from the factory with five-spoke 14-inch alloy wheels standard, while 16-inch wheels were optional, along with a sports exhaust system, high compression pistons, a high lift camshaft as well as a deeper front spoiler. 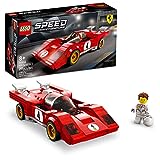